Why Apple Must Buy Netflix

The share price of Apple ($AAPL) has plummeted from a high of $705 to $474 in the last 12 months. Meanwhile Netflix ($NFLX) shares have moved from a low of $52 to $180 in the past 12 months, over tripling its value. Without going into some of the detail referred to in "How far will Apple slide?", Apple's next milestone will come from their success or failure in TV. This is Apple's big opportunity to take on the next generation of internet TV. TV is firmly next in line for major disruption, and if Apple can gain control of the device and the content, then investors will struggle to find reason not to see a bright future. Apple already has this control over music, with ipods/iphones and itunes. It's the control over device and content that is key for Apple to dominate a marketplace. This is where Netflix could substantially add value to Apple. With the rise of tablets, mobile, and apps, it's easy to forget that TV is still the biggest platform when it comes to consumption. Take this example of time spent on TV, via Techcrunch. 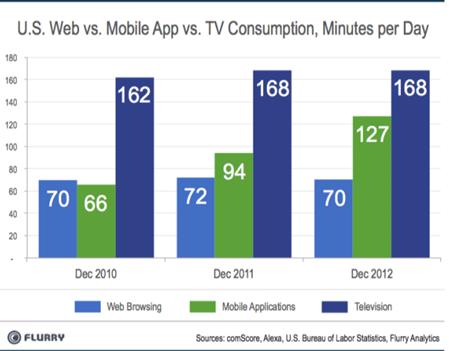 Netflix has 33 million paying members for its video on demand streaming service across 40 countries. They've recently marked an exclusive deal with Walt Disney, and are continually driving their own original series', including House of Cards, with Kevin Spacey. When you look at the investment they have placed in content, it's no surprise that they are market leaders. 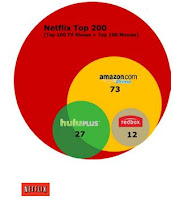 Netflix has been long aware of the shift towards internet based TV and streaming content. Their strategic decision to separate their streaming and DVD service was one that sparked a crash in their stock price from $300 to $52. But this decision was fundamental to the long term success of the company. Netflix has been placing the building blocks for internet TV for several years with aggressive content purchases, technology, and research and development. In the financial statements of Netflix, released 23 January 2013 they claim to be "further along the experience curve when it comes to improving our user interface and delivering great quality streaming." Netflix's experience in technology, usability, and video content acquisition, fits ideally into Apple's own strategic product values. With Netflix, Apple could own a market leader in online video streaming content and technology, whilst integrating it with their own soon to be released Apple TV device. Such a wrapped up service would be a difficult proposition for any cable network or video streaming company to compete with.


Netflix' Management team would also be a welcome addition to Apple, who have seemingly struggled since the loss of Steve Jobs. Netflix' recently released slides on the Netflix company culture have grabbed the attention of the industry as massively forward thinking. Netflix's open culture of expression and freedom promotes innovation, which is crucial to their success so far, and the reason why they will continue to innovate above competitors. Any Management team reading would be well advised to take note of their slideshow. Apple could certainly use innovation at a time when doubt is being raised over the competence of their team to handle such a Goliath.

Apple is currently sat on $137 billion in cash. Even with Netflix's 138% stock jump in the last 3 months, their market cap is only $10 billion. A purchase of Netflix would not only give Apple a massive footing in internet based TV, but it would give them a valuable management team that could help drive their innovations forward once again. All of this and Apple would still be left with $127 billion in cash in the bank. A relatively small risk for such a tremendous stronghold on the biggest sector of consumer technology spending. Disclosure: I have positions in both Netflix and Apple
Posted by John Henwood at 2:40 AM